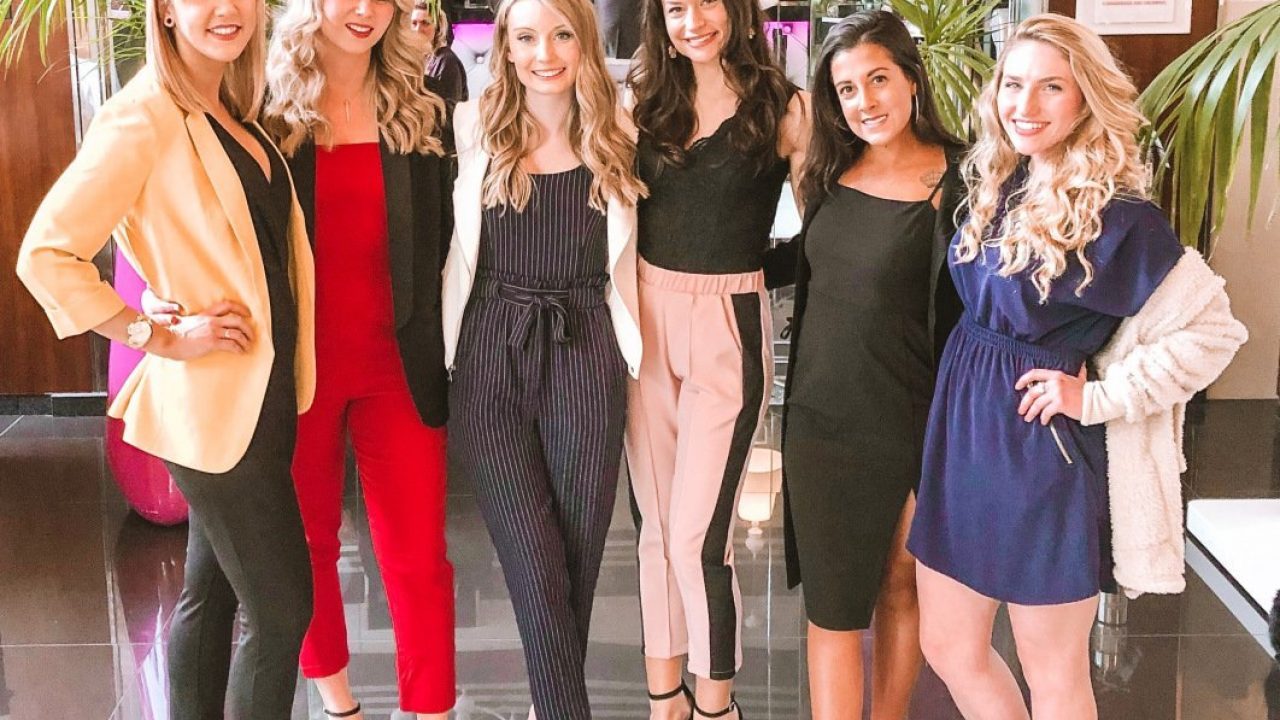 This past weekend was my bachelorette party! My bridesmaids and I took a trip to New York City for the weekend and had the best time!

We arrived Saturday morning at the Hotel Riu Plaza Times Square, where we stayed overnight. While we waited to check in we headed to brunch at the cutest retro place called Mom’s Kitchen & Bar in Midtown, just a few blocks from the hotel.

The menu at Mom’s was so unique! Mac & Cheese Pancakes, Potato Skillet, Chicken & Bacon Waffle, Pancake Burrito, and so much more! The walls were filled with retro decorations like tin lunchboxes and the televisions were playing Saturday morning cartoons, it was an adorable place!

After brunch, we headed to Times Square for some shopping! Although a lot of the stores in Times Square are also stores that can be found at home, the selections are almost ten times the size. We headed to American Eagle & Aerie, Express, H&M, Sephora, Zara and a few other stores. I didn’t purchase much, but I did get a cute New York pullover and a Beach Fleece from Aerie, as well as a David Bowie graphic tee from H&M.

While shopping we stopped for a short bit at Bryant Park for some coffee!

Once done shopping we checked in to the hotel and got ready for dinner and to see Wicked on Broadway! Dinner was at the nicest Italian restaurant called Remi, and the food was SO good! I had Pappardelle al Telefono in Salsa Rosa, which was a wide ribbon pasta in a pink tomato sauce with mozzarella and basil. If you like Penne Vodka, you’d definitely love this.

Once dinner was done, we headed to Gershwin Theatre for Wicked. It was my first Broadway show, and it was SPECTACULAR. I’ve always heard great things about the show, and I’ve heard a few songs from it, but besides that I didn’t know much about it.

Let me tell you, I was blown away by this production. The actors were incredible, the music was amazing and the whole story line was just SO great! It was such an immersive show that had my attention the entire time. I honestly would see it again and again!

Once the show was over, we went to check out a club that I came across on Instagram called RetroClubNYC. The description of the club was that it was a 70s, 80s, 90s club. I LOVE music from those decades, and the club happened to be a block from our hotel, so we figured we’d check it out!

We walked to where the GPS said it would be, but we didn’t see any signs for it or anything like that. Luckily, one of my friends pointed out the music and lights coming from the second story of a building, just above a bagel shop. We walked over to the bagel shop, and in the bottom corner of the window was the tiniest sign for the club, saying it was upstairs. So hence we went, and had THE BEST TIME! We spent the night dancing to Queen, David Bowie, Britney Spears, Eminem and so much more great music!

I really have no words for how fun it was, and I’m sure all my friends could agree!

The next day after checking out, we headed to Black Tapfor burgers and milkshakes! If you haven’t heard of it, Black Tap is quite popular on the internet for those crazy milkshakes! I’ve seen tons of videos about it while scrolling through Facebook and Instagram. We arrived at the restaurant just opened, which was lucky for us because we were seated right away. Within 20 minutes after we arrived, there was a line down the block to be able to get in. It definitely lived up to the hype, the burgers were delicious and even though I didn’t get a milkshake, some of my friends did and they looked great — topped with cookies, pretzels, candy and even an entire slice of cake. I would definitely recommend checking out this place if you go to New York, but be prepared to wait!

Overall, we had an amazing weekend, and I couldn’t be more thankful for my bridesmaids for it all!